06 Aug For Casey: My Reflections on Losing my Little Sister to SUDC

Posted at 13:22h in Family Support by Stephanie Zarecky
0 Likes 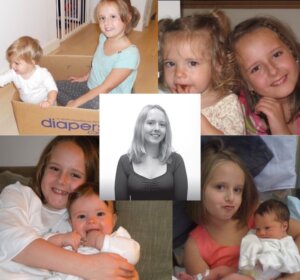 Many people cannot clearly remember the events of their early childhood. Even though younger children are capable of encoding episodic memories, they tend to fade away as they create new ones during adolescence. However, I think I have found an exception, for my most vivid memory took place nine years ago, when I was only eight.

The sun was just starting to sink below the Brooklyn skyline and it colored the clouds a beautiful mixture of orange and pink. I was a little third grader playing with dolls at a slumber party, blissfully unaware that my whole world was about to be turned upside down. My parents picked me up early and sat me down on my friend’s stoop. I could see on my parents’ faces that something was wrong, and my first instinct was that one of our cats had died. But when they started to speak, I realized it was even worse than I could have ever foreseen.

That morning, my little sister, Casey—who was just shy of two—had woken up with a fever. It was nothing out of the ordinary, though; kids get fevers all the time. My mother had put Casey down for her daily nap that afternoon, but when she went to go wake her up a few hours later, she was no longer breathing. She was rushed in an ambulance to the nearest emergency room, but it was too late. I never got to say goodbye.

This is a story that has followed me around for nearly a decade, and it will continue to for the rest of my life. The siblings of those lost to Sudden Unexplained Death in Childhood (SUDC) carry around a special type of baggage; not only do we live with the pain of losing our other half, but also the torment of not knowing what happened to them and wondering if it could someday happen to us.

Many of us siblings are young when this happens, so we’ve usually only experienced death in the movies or on TV. We might comprehend that a disease makes someone sick or that a bullet makes you bleed, but that’s about it. So how do you explain to a young child that her sister is gone for no known reason? The truth is, in my opinion, there’s no good way. Children are curious by nature—I certainly was—so it’s natural for them to crave answers, which makes it all the more difficult when there aren’t any readily available.

On that stoop, when my parents tried to explain to me everything that transpired, I understood Casey was gone, but what was unclear was how. As an eight-year-old with only a small grasp on the concept of death, the fact that nobody—not even the smartest scientists in the world—knew what killed her boggled my mind.

When my family and I first connected with the SUDC Foundation and started undergoing medical testing, I knew it was mostly to help figure out why Casey had died and to make sure I was healthy, but otherwise I felt like I was kept mostly in the dark. I went from EKG, to echo, to stress test, and every time I asked a doctor what each one was for, they all gave me the same answer: “So we can make sure what happened to your sister doesn’t happen to you.” I know they were being vague in order to protect me from fear, but to the curious kid, that answer wasn’t comforting.

Even though there were no answers at the end of the day, I just wanted someone to explain to me how things worked. I think it’s why kids, such as myself back then, like to play with jigsaw puzzles, make paper airplanes and build block towers just to knock them down when we’re growing up. If someone could have explained to me why we were doing all these tests with just a little more detail, then maybe I could have had more of a sense of what was going on and been less confused.

I always heard my parents talking with the doctors in hushed voices, saying fancy words like “genetics” and “mutation.” All I was told at the time was that they thought something was wrong with Casey’s genes and that my genes could potentially have the same problem, but that didn’t carry much meaning to me at such a young age. I didn’t know what genetic mutations were; I certainly didn’t know that siblings and parents could have genetic mutations in common. Maybe if someone had explained to me what those words meant and how they fit into the puzzle we were trying to figure out, I wouldn’t have spent so much of my childhood confused and paranoid that I would go to sleep one night and never wake up.

So once I was old enough, I took my curiosity into my own hands. In the eighth grade, my science teacher announced that we would be starting a new unit: genetics. I instantly recognized the word from the days when I felt like a lab rat. I soon learned about the wonders of DNA and how it’s like a big book of instructions that your cells read in order to make proteins; the proteins created determine the function of the gene. But if just one word or even a letter is off, the cell can’t make the protein it’s supposed to. We learned that mishaps like this can cause all kinds of illnesses, though some of them can cause no problems at all. We also learned that mutations can be unique to an individual alone or they can run in families.

Armed with this newfound knowledge, I was able to fill in some of the blanks of my family’s weird and tragic story. The reasons behind the incessant needle pricks and heart monitors suddenly became clear: The doctors wanted to figure out if Casey had a disease-causing genetic mutation that was unique to her or one that could have been inherited from either or both of my parents and then possibly passed down to me.

As I’ve matured and become more involved with the SUDC Foundation, the confusion has started to wear away. No, we still don’t have any concrete answers to explain why Casey died, but seeing all that the SUDC Foundation does and throwing myself into the science of how we can research to better understand SUDC has helped to put my mind more at ease.

I’ve also grown more passionate about advocacy. I’m angry that hundreds of children succumb to SUDC each year and still almost nobody outside our community of bereaved families seems to talk about it or even knows what it is. According to the Centers for Disease Control and Prevention, about 400 children each year in the U.S. are lost to SUDC. That number is more than the number of kids who die in all house fires and bicycle accidents. Given that statistic, you would think that the U.S. government might want to fund some research to figure out why our sisters and brothers are mysteriously dying. But the National Institutes of Health has dedicated zero dollars to specifically address SUDC.

I’ve found that the best way for me to cope with all that’s happened is to channel that anger into something productive. Next year, I’m starting college with the intent of studying journalism and public health, inspired by what my family and countless others have gone through. I one day hope to write more about SUDC and help bring greater awareness to the general public. Because maybe if we bring about more awareness, we can increase fervor for the topic on the scientific front, and from that get the answers we so desire. And when we finally do get those answers, I will undoubtedly be thanking Casey.