Posted at 09:00h in Health by Stephanie Zarecky
0 Likes 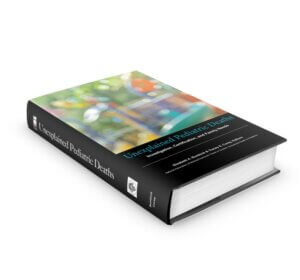 In today’s edition of The Microscope, we feature a piece written by Stacy Drake, Ph.D, M.P.H., RN, who serves on the Panel on Sudden Unexpected Death in Pediatrics, an expert panel convened by the National Association of Medical Examiners to investigate and establish national practice guidelines surrounding the investigations of sudden unexpected deaths in infants and young children to determine research needs and the sensitive care of families affected. This piece was originally featured in the October 2020 edition of the newsletter for the American Board of Medicolegal Death Investigators.

Each year in the United States, more than 3,000 infants and children die suddenly, unexpectedly and without explanation, even after an investigation and autopsy. While the number of deaths in children under the age of 1 declined in the 1990s, it has plateaued for the last two decades. These unexplained pediatric deaths have profound effects on families, as well as serious implications for our medicolegal death investigation system, public health system and society at large.

In 2016, the National Association of Medical Examiners (NAME) led an effort in collaboration with the American Academy of Pediatrics (AAP) to create a working group to investigate and establish national practice guidelines surrounding the investigations of sudden unexpected deaths in infants and young children, to determine research needs and the sensitive care of families affected. The work was funded by a grant from the Sudden Unexplained Death in Childhood (SUDC) Foundation. SUDC is a category of death in children between the ages of 1 and 18 that remains unexplained after a thorough investigation, including an autopsy. The SUDC Foundation is the only organization worldwide whose purpose is to promote awareness, advocate for research, and support those affected by SUDC.

This working group established the first ever-national consensus guidelines in the U.S. to fill crucial needs for determining why unexplained pediatric deaths happen and how to support families after these tragedies. The guidelines were recently published in a book, Unexplained Pediatric Deaths: Investigation, Certification and Family Needs.

I was honored to serve within this diverse committee representing the death investigation community. I gained profound insight during the meetings when hearing from family members whose child had died a sudden unexpected death.

The first insight came when a family member discussed how it felt to receive a copy of their child’s autopsy report in the mail. As a death investigator, we are conscious of the challenges encountered when talking with family after a sudden death especially the sudden death of an infant or child. After conducting the interview, I always believed that offering something at the close of the conversation was helpful. For me, this usually meant offering the family an opportunity to request a copy of the death investigation and autopsy report. Listening to this mother/father, I learned that receiving it can re-traumatize the family member. I learned that how the report is delivered is critical. Families often do not appreciate reading about the actual procedure, organ weights, or pathological finding of their loved one. Our working group suggested that a cover letter providing details of what the report contains should be provided with the report. It can help the family when this letter is reviewed with their healthcare provider and/or the forensic pathologist. Today, when I am speaking to bereaved families, I often let them know that a copy of the autopsy report can be provided; however, we would like to discuss these findings with them personally, first.

The other insight I gained was how to approach the family during the time following their loss. Families offered stories about some of the good and hurtful experiences they encountered with their death investigator. These brief but memorable interactions left an imprint with families. With this insight, I learned that despite feeling the stress, I need to stop and pay attention to both my verbal and non-verbal communication.

The most important thing I took away was that the work that we do in death investigations is important and is valued by surviving families, healthcare providers, forensic pathologists and has the potential to impact the health of our communities and lead to further reductions in infant and child deaths.

Being a part of this working group has been invaluable to me professionally, and the publication we produced is an invaluable resource for medicolegal professionals. Without national standards for investigating these deaths, our ability to understand and prevent them in the future is severely handicapped. A standardized approach to death investigation and certification may improve surveillance, accuracy of data and prevention strategies.

Following are some of the recommendations applicable to medicolegal death investigators.  To learn more and purchase the book, please visit sudpeds.com.

• Any child death falling under the jurisdiction of a medical examiner/coroner should be investigated by a certified medicolegal death investigator who is independent from law enforcement.

• Investigators should gather as much health history on the child as possible including records from his/her mother’s obstetrician, birth hospital, pediatrician, other hospitals and emergency treatment, and school.

• Professionals should maintain an unbiased, non-accusatory approach to parents to prevent further trauma.

• An autopsy must be performed in all sudden unexpected deaths in infants and children unless prohibited by law (such as in cases of religious objection in certain states).

• The authors promote the use of a “synoptic” report to clarify key findings not included on the death certificate but that are essential to improve surveillance and research. It also limits the use of acronyms to improve accuracy, consistency in certification and reduce confusion.

Stacy Drake, Ph.D, M.P.H., RN, AFN-BC, D-ABMDI, is an associate professor at Center for Excellent in Forensic Nursing at Texas A&M University and has served on the National Association of Medical Examiners’ Panel on Sudden Unexpected Death in Pediatrics since 2016.