16 Mar We’re Not Really Alone: The Importance of SUDC Awareness 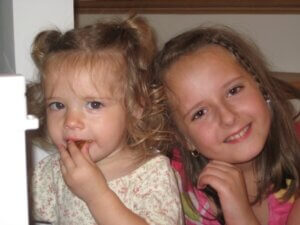 When my 21-month-old sister, Casey, died suddenly and unexpectedly in her sleep back in 2011, all of my emotions swallowed me whole — sadness, grief, anger, confusion, fear and so many others. But one other less obvious emotion also stuck out and took over my life: loneliness.

I couldn’t help but feel like no one else in the world could possibly understand what my family or I was going through. None of the other third graders in my class could relate to me when I was pulled out of school for the week to attend the funeral proceedings, and when I went to my friends’ houses after school, their siblings were still there — happy, playing and still alive.

I especially felt alone because of the way it happened. I was always hearing on the news of little kids dying in natural disasters, of long-term illnesses or because of other unspeakable tragedies. But before Casey, I had never heard of a seemingly healthy child just randomly dying in their sleep. No one in my life had.

We were told that there was no explanation. That it was a rare, unsolvable medical mystery. However, as I would eventually learn, just because an experience is rare, that does not necessarily mean you are alone in it.

In 2020 alone, 390 children in the U.S lost their lives to sudden unexplained death in childhood, or SUDC. The rate at which SUDC occurs could be even higher, as the way death investigations are conducted vary by region. Therefore, any count is an estimate. Currently, there is little knowledge about what causes SUDC, no way to predict or prevent it and no targeted federal funding to research it.

I have found that no one really knows what SUDC is outside of those it has affected, including medical professionals. Every time a new doctor asks for my family medical history, they are stunned. I cannot help but wonder how many cases of SUDC aren’t being caught by medical examiners simply because there is so little awareness about what it is, and instead considered explained with a speculative diagnosis.

If my family had not learned about SUDC, our lives would have veered down a very different path. Because Casey’s death was identified as SUDC, my family was given access to extensive medical testing for genetic diseases linked with sudden death. However, families can only access these possibly life saving tests if they know about SUDC. Awareness is integral, otherwise medical professionals are left unable to assess the risk of surviving relatives. Awareness also paves the way to more funding into research, that way deaths can be accurately counted, causes can be investigated and maybe one day prevention strategies can be formed in order to ensure that this doesn’t happen to another child ever again.

And of course, as cliche as it may sound, awareness is what ultimately brings us together — so that we don’t feel alone anymore. I remember when I was about 14, my mom, my youngest sister and I went to an event with other SUDC families. All of the families were supposed to decorate candles with the name of the child they lost and then take turns bringing them up to a pedestal at the front of the room. We watched as the pedestal slowly turned into a rainbow of the names of children who had been lost in the same way that we lost Casey. There were almost too many to comprehend.

I was also asked to read a poem for the event. I remember standing at the front of the room seeing all of those families looking back at me, and it was then that it hit me just how many of them there were. So many of them were kids who had also lost their siblings, just like I had.  I had spent so much of my childhood ruminating on the loneliness of my family’s situation, yet here was a room filled to the brim with people who were all stuck in the same boat. I like to think that more awareness can help find the stragglers out there who are still lost at sea, thinking that they’re alone and that there’s no one in this world who could possibly understand what they have gone through.

It is absolutely heartbreaking knowing that all of these families have experienced the same trauma that mine has, but I now know that the idea that we are alone in that trauma is simply a fallacy.