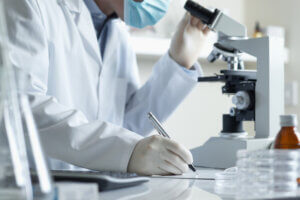 Glucose, a simple sugar, is the main source of energy for most cells in the human body, especially for the neurons in our brain. The mitochondria (nicknamed the powerhouse of the cell) in these cells break down glucose and turn them into adenosine triphosphate (ATP), or the energy currency of the cell, that is then used throughout the body for important metabolic processes (chemical reactions that turn food into energy). As with every metabolite in the body, the glucose level needs to be maintained within a certain range in order to guarantee optimal performance in the body. If the body has too much glucose, such as in diabetes, glucose can start to damage the body; if the body has too little glucose, such as during times of starvation, the body will start to deplete its energy stores to make new glucose until it can no longer sustain metabolic processes, such as in death.

In order to asses glucose metabolism in clinical settings, the patient’s blood is directly analyzed for the total blood glucose or HbA1c (glucose attached to hemoglobin, the best measure for diabetes). The values are then compared to established ranges to indicate the patient’s health and to make diagnoses. However, in the postmortem (after death) setting, blood glucose levels are far less accurate measures of the patient’s glucose metabolism prior to death. When a person has a cardiac arrest and his or her heart and lungs stop working, blood glucose concentrations can fluctuate widely due to a variety of reasons. Any surviving cells may continue to process glucose, which causes a decrease in blood glucose levels. Then, to compensate for the decreased blood sugar, the body will automatically reach for its energy stores to make as much glucose as possible, causing a spike in blood glucose levels.1 The cycle will rapidly continue and, as more and more cells continue to die, will eventually come to a stop, and blood glucose levels will ultimately reach zero.

In the setting of SUDC, the line between antemortem (before death) and postmortem testing is oftentimes blurred. For example, how should one interpret the blood glucose levels of a child  brought to the Emergency Room after being discovered unresponsive? Unfortunately, the majority of children who succumb to SUDC are related to a sleep period.2 The unwitnessed death contributes to a delay in resuscitation efforts, making their blood glucose levels more unreliable to interpret; they could be high, low, or undetectable due to the aforementioned reasons. It is also important to note that due to the wide range of blood glucose levels after death, it is inappropriate to use it alone as a measure to estimate the time of death.

Among SUDC cases, there is a small cohort of children who had a witnessed collapse and were immediately brought to the Emergency Room with subsequent resuscitative efforts. From some studies conducted among adults who suffered from cardiac arrests, it was revealed that higher blood glucose levels within the first 24 hours of their cardiac arrest were associated with worse brain function.3-5 Yet, the mechanism of this association is not well understood. Additionally, the observational studies do not demonstrate whether treating acute hyperglycemia after cardiac arrest improves outcomes. This lack of information and targeted studies among children reinforces the unreliability of using blood glucose levels as a measure of prognosis and survivability in children who suffer a witnessed collapse.

Although postmortem blood glucose testing is insufficient to accurately certify the cause of death in cases otherwise undetermined, testing other bodily fluids for glucose levels, chemical products of abnormal glucose metabolism, and sometimes HbA1c, may help determine whether the child had undiagnosed diabetes and if it contributed to death. Bodily fluids tested for postmortem glucose levels, in addition to whole blood, including vitreous fluid/humor (the gel-like fluid that fills the eyeballs), pericardial fluid (PCF, the fluid that surrounds the heart), cerebral spinal fluid (CSF, the fluid that surrounds the brain and spinal cord), or urine. The most common bodily fluid tested for postmortem glucose levels, including for SUDC autopsies, is the vitreous fluid.

In contrast to blood, the vitreous fluid has minimal cell contents, making it more resistant to postmortem metabolic changes, including glucose metabolism, and therefore, more favorable in assessing metabolic abnormalities that may have existed prior to death.1,6 In rare cases, hyperglycemia, or high glucose levels (>10 mmol/L or >180 mg/dL), may be detected in postmortem vitreous fluid testing and point toward undiagnosed diabetes that potentially elucidates the cause of death.6 But, supporting studies like ketones and HbA1c levels will need to be performed to confirm the diagnosis and the forensic pathologist will review this information under the context of all investigative findings.

In summary, glucose levels are routinely measured in clinical settings due to concerns for adverse complications from hyperglycemia and untreated diabetes, as well as hypoglycemia (low blood sugar). However, postmortem glucose testing, whether in whole blood or other bodily fluids, is less reliable when performed alone. Even though vitreous fluid testing has a slight advantage over whole blood in predicting antemortem glucose levels, additional biochemical studies and a comprehensive autopsy are necessary to accurately determine the cause of death. Only deaths with no apparent or known cause of death following a comprehensive investigation will be certified as Sudden Unexplained Death in Childhood, most of which will present with undetectable glucose levels in postmortem testing.